HOW A BRAND BECAME TO BE AN ICONIC BRITISH SYMBOL

MARMITE – The dark, sticky goo that has created its own advertising tagline of “Love it or Hate it”, and has been dividing the British public since its inception in 1902.

The background of the spread goes all the way back to the 17th Century, where a scientist from the Netherlands, Anton van Leeuwenhoek (October 24, 1632 – August 26, 1723) who is commonly known as “the Father of Microbiology”, and considered to be the first microbiologist and the inventor of the Microscope.  He was the first to observe yeast microscopically, but at the time did not consider them to be living organisms but rather globular structures.

In 1857 French microbiologist Louis Pasteur discovered that alcoholic fermentation was conducted by living yeasts and not by a chemical catalyst. Pasteur showed that by bubbling oxygen into the yeast broth, cell growth could be increased, but the fermentation inhibited – an observation later called the Pasteur Effect.(1)

Jump onwards to the 19th Century, where a famous German scientist, Justus Freiherr Von Liebig (12th May 1803 – 18th April 1873) accidentally discovered that the waste product derived from yeast used in brewing beer could be made into a meaty flavoured concentrate that was completely vegetarian.

This scientist and professor, considered to be the founder of organic chemistry, was  the first to make and sell bouillon, a meat extract commercially before refrigeration due to it being concentrated. So not only did he discover what eventually became Marmite, but he developed the process for beef extract and founded a company called Liebig Extract of Meat Company, which eventually trademarked as OXO.

It took Marmite to actually commercialise the product and so on the unlucky day of Friday, the 13th of June, 1902, Marmite Food Company was born and a boom of love and hate started.

They opened in Burton on Trent, two miles down the road from the Bass Brewery that had been there since 1777.  They chose Burton on Trent due to BASS being the biggest brewer of the time, and whose leftover yeast they used and still use to this day.  The general method for making yeast is to add salt to a suspension of yeast making the solution hypertonic, which leads to the cells shrivelling up. This triggers autolysis, where the yeast’s digestive enzymes break their own proteins down into simpler compounds, a  process of self-destruction. The dying yeast cells are then heated to complete their breakdown, after which the husks (yeast with thick cell walls which would give poor texture) are separated.(1)

The post-fermentation waste product is sold to Marmite from BASS Breweries and others around the area and taken to the Burton on Trent where Marmite create their superb magic.  It was initially produced in an Earthenware jar until 1920 when the iconic brown bulbous glass jars were introduced which have changed little in design for almost a century.  The jar is brown because exposure to light destroys some of the vitamin B’s that help make Marmite a health-giving product. 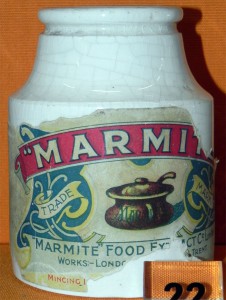 From the onset, Marmite had been popular with vegetarians, but In one year, Marmite had made such a name for itself that it won TWO Gold Medals one at the Universal Food and Cookery Exhibition 1903 and the other at the Grocery Exhibition 1903.  Marmite had fully taken off……….. , and its unique taste was discovered by more and more people.  By 1907 it had become so popular that a new factory opened at Camberwell Green in London, but there isn’t much that can be found about it apart that it was on the North side at 52 Camberwell green – there is a surgery there now.  It is listed as being there in a copy of the Kelly’s, Post Office and Harrod & Co Directory which was a trade directory in that listed all businesses and tradespeople in a particular city or town in the United Kingdom.   There is no information on how long it was there or when it finally closed.

During the First World War, due to the spread being packed in vitamins and minerals, especially Vitamin B1, it was part of the rations for the troops helping to combat  the outbreak of beriberi and other deficiency diseases, and during the Second World War, it had been a standard vitamin supplement for British-based German.  In the 1930s, Marmite was used by the English scientist Lucy Wills to successfully treat a form of anaemia in mill workers in Bombay, India.  Lucy later identified folic acid as the active ingredient.(2)

The Marmite Museum collection is in possession of an old wooden Marmite crate that had been converted to be a wartime radio, the original casing destroyed, and the crate being a perfect receptacle to be a replacement.  It is not in working order, but it’s a relic of historical importance

In 1927, they took over an old Brewery building in Vauxhall, London to run as their second plant.  The building used to be owned by New London Brewery Co. which went into liquidation in 1925.  It seemed the perfect location to open this second plant which stayed in production until its closure in 1967. 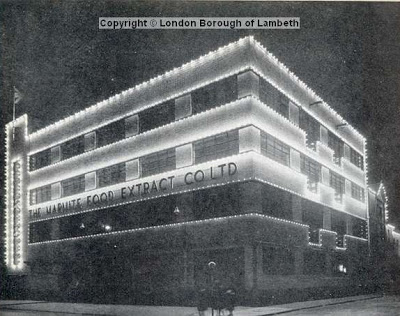 Image 2 – View showing the floodlit premises of The Marmite Food Extract Company, Kennington Lane at the junction with Durham Street. Millions of jars of this famous product was produced annually from brewers yeast at this factory
Published in the ‘Lambeth Guide’ 1951

By the 1950’s, after 50 years of selling MARMITE, the company was able to claim that it was a product handed down from generation to generation. The advertising theme at this time focused on the benefits for children and so it was, being one of the items given to welfare mothers to feed children in Clinics all over the UK

In 1974 there was a shortage of the familiar glass jar and so for a while MARMITE was sold in more standard shaped and coloured jars.

In 1984, Marmite decided to exchange its metal screw top lid for a plastic one and there was an outcry by the fans who felt this was a dreadful idea.  This is when Marmite really became recognised as a cult British product and it has been that way ever since, growing in number by the day.

Marmite was acquired by its current owner, Unilever,  in 2000 when it was brought to the company by the merging of Best Foods and Unilever.

5 thoughts on “The History of Marmite”