ABOUT ME AND THE DREAM OF A MARMITE MUSEUM

I was a late lover of Marmite, only finding this out back when I was 16.  My mother, a hater, did not have it in the house when I was growing up, so I never realised the wonder of it until having a taste of it in a friends house.  From then onwards I’ve been hooked and it’s always in my house.  In fact I’ve normally got more than one on the go as I still have the older Marmite flavours such as the Guinness Marmite.  I think Marmite only gets better with age 🙂

Back in 2010 I entered a Marmite competition that I found online.  The prize would be to win one of 200 special editions of the new Marmite XO, a richer more mature tasting Marmite that was about to be released.

This got me quite excited as I had loved Marmite since I was 16, but as time went on, I forgot about this competition until months later when I received an email from Marmite congratulating me that I was one of the lucky 200 people who had won one of these wonderful sets, but not only that, I was also allowed access to the ultimate of all Fan clubs……….The Marmarati. 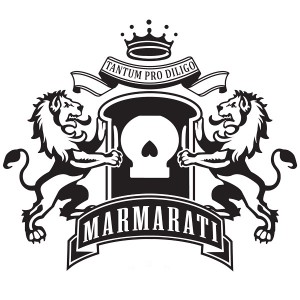 The Marmarati is a very secret organisation that only the most discerning of Marmite lovers were entitled access to it.  Without me realising, this had been the seed to the collection that has been my obsession for over 5 years. The photos below are a year by year size comparison. (You can enlarge the images below by clicking on them and they open in a new page. Just shut that page down then to return to this one).

Since being a part of the Marmarati, I have met some very special people, some have become the closest friends that I have in my life. It seems that Marmite just carries on giving and more than just treasured items)

I have now amassed a hoard or wonderful Marmite official, liscnensed and home crafted items. Every year I take a photograph of the whole collection and every year it gets larger and larger. My collection has been shown and written about all over the world, including South Africa, Malaysia and Australia. I have even had mail sent to me from other Countries where people have read about the collection and been inspired by it, the last letter being all the way from New Zealand where a Marmite lover (not our lovely Marmite, but their own version) and she had let me know the difficulty they had over there trying to get hold of their Marmite after an earthquake took down the factory in Christchurch down for over a year.

I pondered a long time after that letter, my mind wondered what would I do if something similar happened in Burton-on-Trent? It would be a disaster for Marmite lovers if something happened like that in the UK, but I have years of Marmite for consumption to ease my own pain of that, and would feel compelled to send “disaster recovery parcels” to Marmateers and Marmarati via the postal service to ease their pain. Luckily for us here in the UK that we live in a Country where we rarely have extreme weather, and no earthquakes to speak of, and no active volcanoes. For the sake of the Marmite factory and Marmite lovers every year, I am thankful of that

I started a Facebook Page that has grown to over 6000 fans, a popular Facebook Group where likeminded individuals can come and chat Marmite and any other conversation they want to have. I’ve also branched into Twitter, and it’s helped me connect to many new people who I’m hoping to work with as my idea of a permanent museum becomes possible.

My dream is to open a proper bricks and mortar Museum with an adjoining gift shop and cafe. There would be a walkthrough of the history of Marmite from the 17th Century to the present day, and sectional areas for the rest of the collection. I have a couple of other individuals connected by their love of Marmite who would like to tie in with this showing their own versions of Marmite love who would have their own areas within the Museum.

The Marmite Museum Cafe would serve a range of beverages and snacks, just like a normal cafe, and of course, Marmite would be a fundamental ingredient for drinks and snacks (with normal snacks for Haters who were dragged as accompanied persons).  The gift shop whould hold many Marmite giftware that were available at the moment, and by coming to an agreement with Unilever, I would love to include the Marmite Museum’s own specially branded 250g Marmite jar in that shop.

As I would want the Museum to be a non profit entity, all profit from the shop and cafe would be donated to a registered UK charity chosen by the public by online poll every year. The Museum itself would be free of charge to enter, but there would be a donation box at the exit point for any donation that the visitor thinks generously to give on leaving the Museum. This donation box would be to help the Museum purchase future items to keep building the collection and public viewing.

This is my dream, but while my life is dogged by work, disabilities and other barriers such as a location and how to get volunteers to help run the place, it stays as a dream………………………..for now. In the meantime, while we wait for the dream to become a reality, I hope that everyone enjoys the Museum in its virtual form.