How does Marmite HQ create its magic to turn a load of wasted slurry into the beautiful dark brown spread that is Marmite. Approximately 50,000 tonnes of brewers years is trucked through the gates of the factory every year. Most of it comes from the local BASS breweries as well as Marston’s and Coors around the Burton area, where the brewers yeast has been procured since the inception of Marmite in 1902, but so much of it is needed they are having to collect from further afield to breweries to up and down the country and can never be sure, what strains of the yeast slurry they are going to get due to the different beers they are brewing at that particular time. Due to this, not every batch of Marmite is exactly the same, only fractionally different, but a keen palate can taste it. 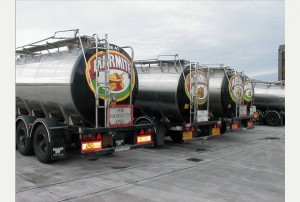 The slurry is pumped out of each tanker into large autolysis machines where salt, enzymes and water are added to start the process of extraction. Autolysis is the process by which a cell will consume itself using enzymes contained within the same cell at a specified temperature. After this process, any remaining hops and other waste are removed which is reused by the agriculturalists as a soil conditioner that greatly helps to improve the soil’s properties, so even waste is not wasted. Unilever has promised to be 100% sustainable in keeping any waste from landfills by 2020, and already 18,000 tonnes of solid Marmite waste is converted into methane via an anaerobic digester which is used to provide 30% of the factory’s thermal energy.

Once the remaining liquid has simmered for a few hours, the evaporation of water has turned what is remaining into a thickened mixture and completely stable, this mixture is now filtered again to bring it to a paste and transferred into huge vats until needed. This whole process so far has been automated, but now as the blending begins and other ingredients are added, the workers of the plant come into play.

Customers are fickle characters and Marmite cannot fluctuate too much from the original recipe, hence the staff have to ensure that the basic ingredients for Marmite are perfect, and only then the secret ingredient is added, it’s a closely guarded secret, and only a handful of people know what is in this recipe. Once the Master Blender (St John Skelton who has worked in the plant for over 40 years) has passed the paste in the quality taste test, it is warmed to 40 degrees which is the optimum temperature for the Marmite to be a runnier consistency to pump via to the production line to the final part of the process – filling the jars. Unilever fastidiously tests the palatte of every worker. And the ones with the most finely tuned tongues are used to taste every batch.

The filling of the iconic jars is another automated process from start to finish, the jars are manufactured in Germany at a pharmaceutical glass company. Overlooked by various engineers and computer operatives. The jars are checked for glass flaws or foreign objects using a Sidewall Inspection Machine, rejecting any jar that isn’t perfect. Once passed the jar is blasted with air to remove any dust and only then the jar is ready to be filled with Marmite and the lid is screwed on. As soon as the lid is safely screwed on, the jars are swiftly sent to the labelling section where the ultra recognisable label is added to the front and back of the jar and finally reaches the packing section where it’s stacked on pallets and is ready for distribution.

So now you can see how much work goes into changing the slurry that comes from the breweries into the wonderful paste that is Marmite.