Marmite flavoured crisps are back – and, apparently, are here to stay. 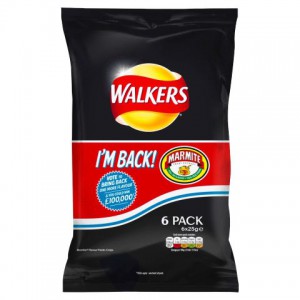 Back when they were out in the late 1990’s and early 2000’s, they were the most favourite crisps ever for me.  Even Marmite haters seemed to like the wonderful savoury taste.

This is part of a Walkers promotion to offer returning some well loved flavours.  The ones on offer are – Lamb & Mint, Grilled Cheese, Sour Cream & Chive, Beef & Onion and Barbecue.

As soon as I realised they were out, I rushed to the shops looking for my old friend that gave me such savoury enjoyment all those years ago.  In the end, I found it in Boots Chemist, of all places.  I didn’t even wait to go home, scoffing the whole bag as soon as I got in the car.  I really enjoyed the flavour and the crisps were in typical Walkers style of being translucently thin.   The flavour punch was missing though and as much as I enjoyed them, they weren’t on par with what they used to be, neither were they as “moreish” as the Tato (Golden Wonder) Marmite flavour crisps that come in the black bags.  I did go as far as buying a whole box of them though to join my box of Tato Marmite crisps. 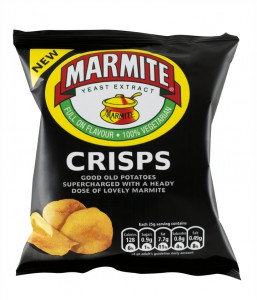 It seems odd that after years of campaigning for the return of Marmite crisps, we are now spoilt for choice.  For newly hatched Marmite lovers, the Walkers pack is a great starting point before stepping up a level to the Tato packs which avid Marmite fans prefer.

Just to say though, that another flavour that disappeared silently, was another one of my favourites – Beef & Onion – I also bought one of these at the same time, and these were nothing like the ones that I loved so much back in the 80’s, I was very disappointed and will certainly not be voting for that one…………

If you want to vote for yourself, you can do so here Walkers “Bring it back”