In October 1996, Marmite launched a campaign using the strapline “Love it or Hate it“.

Nobody could have predicted that it would become such a massive effect on the brand and created it into an UK Iconic Brand. 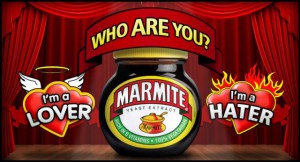 Marmite – Do you Love it or Hate it?

The public embraced the slogan almost immediately, and started using it to describe examples of people or things that they weren’t too sure about. Some people were classed as being Marmite – you either love them or hate them. Even the celebrities have adopted the phrase, many classing themselves as a “Marmite person”

Almost 20 years later, the slogan is still going strong. So where did the idea for that strapline come from? 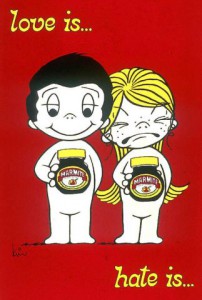 A Marmite spokesman spoke to the Burton Mail Newspaper saying that at the time, Marmite were using an advertising agency called Adam and Eve DDB. Strangely enough, with one of the team being a lover and one being a hater, the strapline came into its own naturally and pretty much mirrored the opinion of the nation to the savoury taste of Marmite.

A game manufacturer have even created a board game under license from Marmite, and won a £50,000 investment via Dragon’s Den. Duncan Bannatyne and Peter Jones loved the idea, however, at the time they weren’t allowed to reveal that they had an agreement with Marmite to create these games.

If you want to get hold of this game, here is a link to the Amazon page and the price shown at £9.99 is a saving of £8.00 the RRP.  I was at the launch of the game in London in September 2014, and it is a really good fun game for the whole family.  The NEW item is in stock, USED items are out of stock.  Amazon’s own product listing is very hard to see the IN STOCK next to the £9.99.