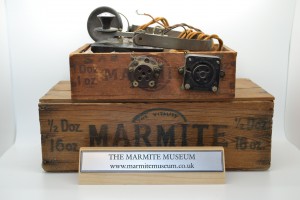 This particular item was purchased, as it happens, around the time of the centenary in 2014.

During the first World War (WW1), Marmite sent the soldiers fighting in the trenches plenty of Marmite for their ration packs, the fact it could ward off the vitamin B1 deficiency beri-beri, which was common during the war and so made it a staple item for the troops.  As Marmite was one of the only foodstuffs to claim the inclusion of B vitamins, it made it a crucial diet choice.

This is a morse code kit that a resourceful soldier must have created in the field using an Marmite box that would have been left over from the deliveries to the troops. Sadly, this isn’t complete and would need a lot of work to be working order again.

I was really pleased to get hold of this fascinating piece of history. If only this box could speak, what stories it would have and did the soldier who made up this kit survive the war and was it instrumental in saving people’s lives.

A great find for the museum collection during this Centenary year of World War 1.